Posted at 12:13h in Behaviour, Investment, Risk by Carolyn Gowen

Image: The Entry of the Crusaders into Constantinople, Eugène Ferdinand Victor Delacroix (1798-1863)

“Innovations usually begin life with an attempt to solve a specific problem, but once they get into circulation, they end up triggering other changes that would have been extremely difficult to predict.”

Steven Johnson, How We Got To Now

How did the sacking of Constantinople in 1204 lead to the creation of the World Wide Web?

At the beginning of the 13th century, the Byzantine empire was one of the most powerful in the world. Until, that is, the Fourth Crusade was diverted from the Holy Land to attack and capture Constantinople. Whilst that in itself led to a huge global power shift, a seemingly somewhat irrelevant event at the time would go on to have an arguably equally significant effect on the history of the world.

In the wake of the fall of Constantinople, a small group of glassmakers fled Turkey. Crossing the Mediterranean, they ended up in Venice – then the most important trading hub in the world – where they continued their trade, bringing additional wealth to the city.  However, producing glass required furnaces operating at extremely high temperatures, which for a city built of wood posed an unacceptable level of risk of the neighbourhoods in which the glassmakers had set up shop being burned to the ground.

So, in 1291 the city government decided that the glassmakers could no longer stay in the city. They were moved just a short journey across the lagoon to the island of Murano.  The island is tiny in comparison to Venice itself – the size of a small neighbourhood.  The result of the move was to create an ‘innovation hub’.  The glassmakers were now rubbing shoulders with each other, and whilst on the surface they were competing for trade, the sheer density of the population meant that new ideas were spread and adopted quickly.

By the beginning of the 14th century Murano had become known as the Isle of Glass, and even today Murano glass is world renowned for its beauty and quality (it even has its own trademark).

The sharing of knowledge by these glassmakers accelerated the development of glass far more rapidly than would otherwise have been the case. The glassmakers of Murano would go on to develop clear glass and mirrors.  Their pioneering work with glass would ultimately lead to the invention of telescopes, microscopes and fibre optics – the very material from which the World Wide Web was created.

Steven Johnson’s book, quoted above, is full of fascinating stories such as this one.  The extent to which coincidence, luck, being in the right place at the right time has shaped our world is almost impossible to comprehend.  With almost every new invention, those around at the time can have had no clue as to what effect such an invention might have on future generations.

In the world of investing, many people are constantly searching for the next Apple, the next Amazon, the next new, new thing.  But realistically, how can we possibly know today which companies will not only still be around in the future, but will produce the new, new thing that changes the world? We can’t.

There’s a reason why so many evidence-based investors comment that diversification is the only free lunch. Taking big bets on which country will be the top performing in any year is a futile enough pursuit, let alone trying to second guess which individual stocks will beat the market: 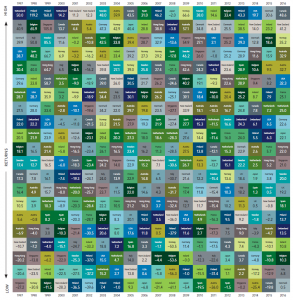 Past performance is not a guarantee of future results.

The above table illustrates just how random returns have been. In the period covered, no country had the best performing market more than two years on the trot. Only two managed to be top for two years running and I’d be willing to bet few people would have chosen Finland and New Zealand as being those countries ahead of time.

As Clint Eastwood might say, “ You’ve got to ask yourself one question. Do I feel lucky?”

It’s true that for US investors, a home-country bias has paid handsome dividends in recent years. But, for most people, ‘recent years’ isn’t the same as ‘your total investment horizon’ which could be as long as 50 years (or even potentially forever if you plan for your wealth to cascade to future generations). None of the following existed 50 years ago:

I could go on (and on), but hopefully you get my point. And technology advances at such a rapid pace nowadays it’s virtually guaranteed that many of the inventions of the last 50 years will be superseded far faster than earlier inventions were.

The above advances didn’t all happen in one country. Who knows where the inventions of the future will originate? Despite its detractors, globalisation is a thing, and I don’t see that changing. As emerging countries continue to develop, innovations of the future could come from virtually anywhere on the globe.

Which is why a low-cost, globally diversified portfolio increases your chances of having a successful investing experience.  The alternative – taking bets on your home country, or a small sub-set of global markets – increases your risk and decreases your investment opportunities.

“Change almost always comes as a surprise because things don’t happen in straight lines. Connections are made by accident. Second-guessing the result of an occurrence is difficult, because when people or things or ideas come together in new ways, the rules of arithmetic are changed so that one plus one suddenly makes three. This is the fundamental mechanism of innovation, and when it happens the result is always more than the sum of the parts.”