Dumb beats Smart - 'When the dumb investor realises how dumb he is and invests in an index fund, he becomes smarter than the smartest investor' 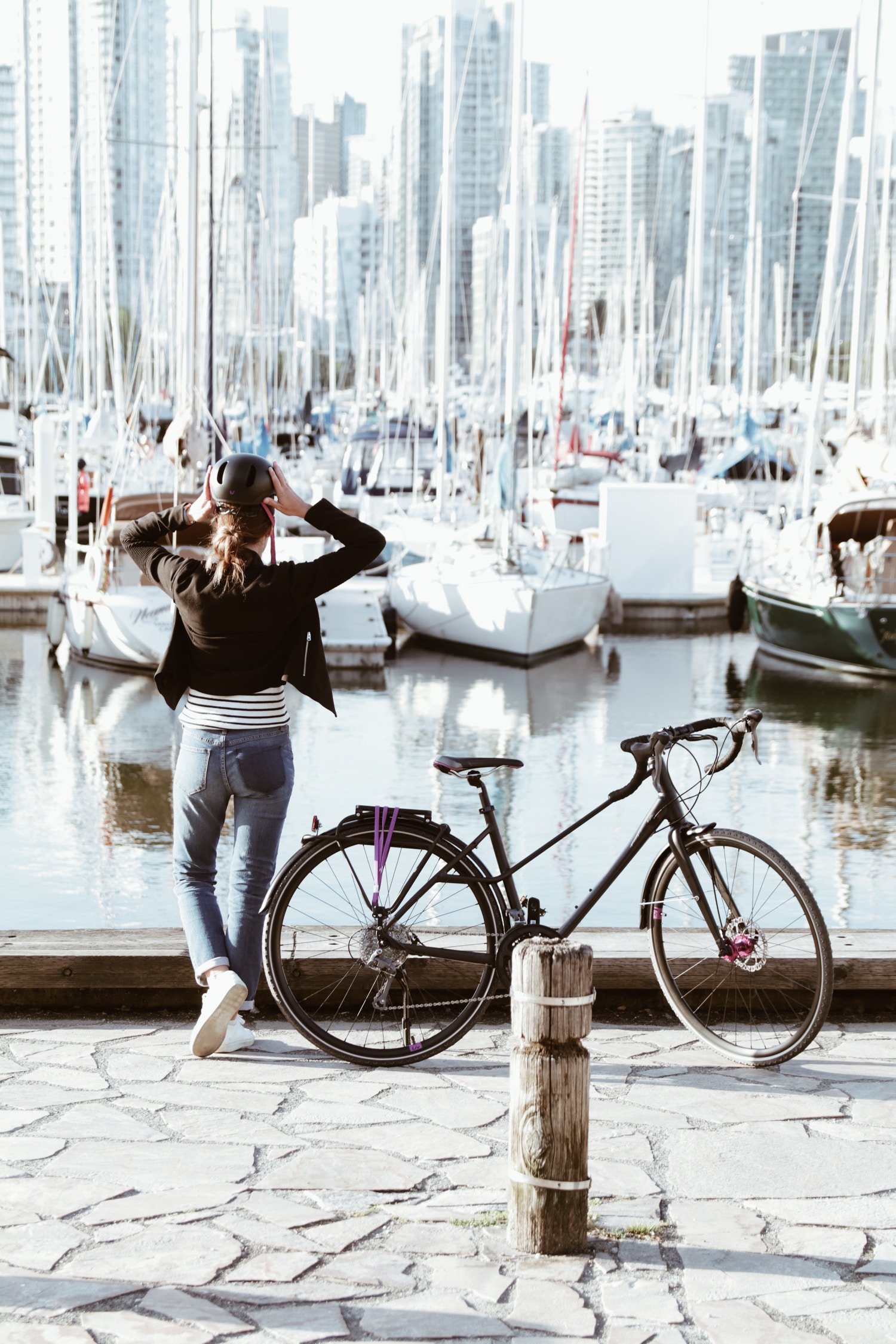 13 Mar Dumb beats Smart - 'When the dumb investor realises how dumb he is and invests in an index fund, he becomes smarter than the smartest investor'

Posted at 14:22h in Investment by Carolyn Gowen

Photo by Alexa Suter on Unsplash

Occam’s Razor:  ‘numquam ponenda est puralitas sine necessitate’ or ‘a simpler explanation is better than a complex one’   –  Father William of Occam, 1285 – 1349

More than 75 years ago, Fred Schwed wrote a book entitled ‘Where Are the Customers’ Yachts?: or A Good Hard Look at Wall Street’.

Although written so long ago, Schwed’s book is as relevant – and informative – today as it was when first published.

However, there are signs that the tide is turning and investors are – quite rightly – starting to question the fees that they are paying to both their portfolio manager and to the active fund management industry.

The fund management industry is a highly competitive environment.  This is perhaps not surprising since it is full of bright, talented, hard-working, highly ambitious and self-confident people.  Basically the industry breaks down into two camps.  The first are ‘active’ managers, who believe that through their skill, insight and hard work they can beat the return of the market, by taking advantage when the market gets it wrong.  Sounds like a nice promise.

The second group, ‘passive’ managers, believe that markets work pretty well and that the chance of picking up and exploiting any mispricing that is sufficiently large to outweigh the costs of doing so is slim, so they do not try.  Their aim is to capture the market return as closely as possible for the investors in their funds, by buying every stock in the market (or specific index) in the same proportion as the index[i].  For example, a FTSE 100 index fund may well own all 100 stocks in the same proportion as they appear in the index.  How dull (and dumb in the eyes of active managers)!

The polarisation between these two camps is the source of much debate, some of it quite heated at times.  Passively managed funds – sometimes known as ‘index trackers’ or ‘index funds’ – are often positioned as being in the ‘dumb’ part of the fund marketplace.  Common arguments built against passive funds are often based on themes that seek to put them down and talk up the sophistication of an active manager’s proposition.  Here are a few you might have heard, and the underlying inferences:

In fact, the passively managed index fund has suffered a torrent of put downs from the active industry from the day the first fund was launched in the US 40 years ago.  One of the first was that, as an American, it was even deemed to be unpatriotic not to try to beat the market!  At first glance these criticisms may seem reasonable.  However, if one digs a little deeper, it quickly becomes evident that they do not stick and the tables quickly turn on the active management promise.

It is easy to think that a smart, well-educated fund manager should be able to beat all the other dumb investors in the marketplace.  After all, if you ever need a barrister to defend you in court, you want to engage the brightest, sharpest QC you can find, who will fight your corner and deliver an outcome in your favour and thus justify the enormous fee that you end up paying him or her.  The value of doing so is quite straightforward.  The situation is similar in other fields, such as medicine, engineering or, indeed, aviation.  In the investment world, this is not the case, by any stretch of the imagination (or evidence).  Here’s why.

The perception of how markets work divides the two camps

The first thing to remember is that in aggregate all investors are the market.  In the UK around 80% to 90% of all money is managed by professional fund managers on behalf of individuals (via funds) and pension funds.  So, when active managers claim that they are going to ‘beat the market’, what they are really claiming is that they are going to beat the majority of the other smart, well educated, and motivated professional investors, who are often backed by vast global research resources.  Even if they are able to beat the other investors before costs, investing is never without cost because there are plenty of stages in the investment process at which various parties extract money for themselves.  Some of these costs are explicit (such as management fees and other costs which together form the ‘ongoing charges figure’ or OCF) but others are less evident, such as those arising when underlying investments are bought and sold (turnover).

The mathematical reality is that the average passive fund will beat a majority of active funds due to their cost advantage.  The cost advantage of passive UK equity index funds (e.g. an index tracker following the FTSE All Share index) versus the average costs of an actively managed UK equity fund is in the region of 0.9% p.a.  The odds in favour of the dumb product already stack up well at this level. 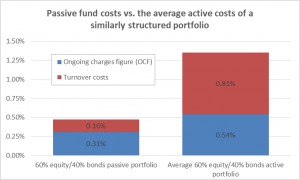 Active management is a zero-sum game – one investor’s profits must come from another’s losses.

The simple maths behind the zero-sum game (all investors are the market, so the average investor will receive the return of the market) needs to be extended to take into account the comparative costs of implementing the strategy of the two camps.  Actively managed funds generally have significantly higher costs than passively managed funds, both in terms of the fees they charge and the costs of buying and selling securities between each other.

Figure 2: The mathematics of the less-than-zero-sum game

However, at this point we can draw no firm conclusions, because if even only a small number of active managers could deliver persistently strong, market-beating returns, if we can identify who they are today and be reasonably certain that their good performance is due to skill and not luck and will continue into the future, we should take that route – smart over dumb.  Therein lies the challenge, as you will see.

How active managers can potentially win

One prominent theory (The Efficient Markets Hypothesis[ii]) suggests that market prices reflect all publicly known information about a company or security issuer.  Thus the price of its shares, determined by the aggregate view of all market participants, is the best estimate of its true value.  If that holds true, then one should adopt a passive approach to investing.

If markets do not work well, then skilled active managers should be able to take advantage of this.  Paradoxically, the more skilled, talented and hard-working the profit-seeking ‘active’ market participants are – such as hedge fund managers, other fund managers and equity analysts – the less likely that any profitable opportunities that do exist will persist.

As active managers do not believe that markets work particularly well, they make short-term forecasts either about specific companies’ earnings or the valuation levels of markets, to position their portfolios.  The implication is that they a) either use the available information better than others or b) they have better information that others do not know, obtained via company visits and deeper industry insights.  This often forms part of their marketing message such as, ‘We have 220 analysts on the ground in 58 countries…’ or ‘we make 500 company visits a year’.  As before, these types of claims all appear to be logical and likely to improve the chances of a better (market-beating) outcome, or so it would naively seem.

By and large, the track record of forecasting across all walks of life is pretty weak (whether by weather forecasters, politicians, economists, academics or fund managers – not to mention pollsters!) and has been subject to much research.  All humans are suckers for a good, confidently told, forecasting story, as we can’t bear uncertainty.  That does not mean the story is right.

An elegant piece of research by Jack Bogle[iii], who has been a pioneer of index fund investing and a true advocate for investors receiving a fair deal when they invest, reviewed all 355 actively managed US equity funds over the 36 year period from 1970-2005.  This is one of the longest studies undertaken on how well active managers have fared and the odds investors face in trying to pick a winning manager, today, for the years ahead.  This is what he found.

Figure 3: It is remarkably hard to deliver on the active promise 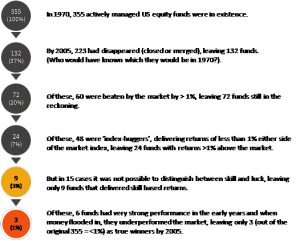 Are those the sort of odds you want to play with your money?

Most supporters of passive investing have become so as a consequence of looking at the evidence available.  Most will admit to some sort of a ‘Damascene’ moment when the realisation dawns on them that success in investing comes not from chasing long odds (hot markets and star fund managers), but by consistently making decisions that maximise the chances of a successful investment outcome.  Most will also readily accept that a few truly skilled active fund managers do exist but they recognise that despite much effort being expended in the endeavour, no-one has yet defined any robust and consistent means of picking them ahead of time and they will not take the chance with their clients’ money trying to do so.

A note from the world’s most successful active manager:

‘When the dumb investor realises how dumb he is and invests in an index fund, he becomes smarter than the smartest investor… most investors, both institutional and individual, will find the best way to own common stocks is through an index fund that charges minimal fees.’

Warren Buffett, Chairman, Berkshire Hathaway and legendary active investor (one of the few).

[i]             In practice, there are several ways in which passive investors capture market returns.  The method used, e.g. full replication or partial replication with sampling, depends on the markets involved and the strategy employed by the manager.  Synthetic replication using derivatives is best avoided for most investors due to counterparty risk.

[iii]             John C. Bogle (2007), The Little Book of Common Sense Investing, John Wiley & Sons, Inc. Hoboken, NJ.  This is a great introduction to the active vs. passive debate, by one of the legends of the investment world.  It is succinct, easy to read and, while most of the data is US-based, the same principles apply in the UK and elsewhere globally.  Really well worth a read.