How to avoid the rocks and the pirates 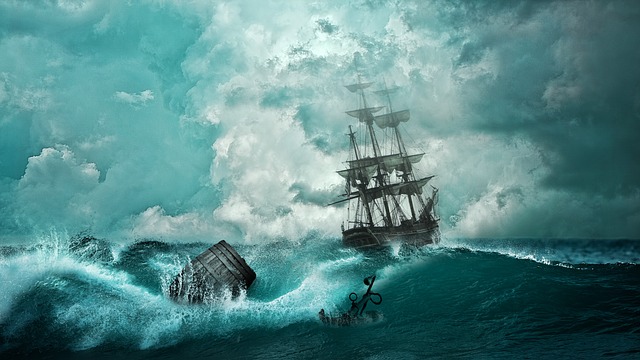 17 Apr How to avoid the rocks and the pirates

“Dirty weather,” Admiral Sir Clowdisley Shovell called the fog that had dogged him twelve days at sea.  Returning home victorious from Gibraltar after skirmishes with the French Mediterranean forces, Sir Clowdisley could not beat the heavy autumn overcast.  Fearing the ships might founder on coastal rocks, the admiral summoned all his navigators to put their heads together*.

The consensus opinion placed the English fleet safely west of Île d’Ouessant, an island outpost of the Brittany peninsula.  But as the sailors continued north, they discovered to their horror that they had misgauged their longitude near the Scilly Isles.  These tiny islands, about twenty miles from the southwest tip of England, point to Land’s End like a path of stepping-stones.

And on that foggy night of October 22, 1707, the Scillies became unmarked tombstones for two thousand of Sir Clowdisley’s troops.”

Only two sailors survived that voyage, one of whom was the admiral (he was murdered almost immediately after he was washed up on the beach, by a local woman who took a shine to the emerald ring on his finger).

The reason the fleet foundered with such devastating consequences was due to the lack of a robust method for calculating longitude, without which determining an exact location was virtually impossible and ships routinely ended up way off course.  Finding their intended destination generally took longer as a result, which exacerbated the disease of scurvy which was rampant on ships during the fifteenth, sixteenth and seventeenth centuries.

Not only was ignorance of longitude a cause of human suffering, the economic effects were massive.  For safety reasons, ships generally stuck to a few safe but narrow shipping lanes where they regularly fell prey to pirates (and one another).  Huge amounts of treasure and goods were lost – the loss from one Portuguese ship, the Madre de Deus, was estimated to be valued at half the net value of the entire English Exchequer at the time.

For many people, their financial lives follow a similar path.  While scurvy and pirates may not be an issue for most of us in the 21st century, not knowing how or even if you are going to reach your intended ‘destination’, i.e. fulfil your goals and wishes (ceasing paid work on a certain date, buying a retirement home in the sun for example) is how many people live their day to day lives.

What does the future hold?

When will I be able to choose whether to stop paid work?

Will we need to downsize our home to survive?

What happens to my partner if I die (or to me if they die)?

How can we help the children and grandchildren without compromising our own future?

How much money is enough?

How do I know I’m not going to run out of money before I run out of life?

How can I make sure I don’t fail to do the things I want to do before I’m too old or infirm to enjoy doing them, simply because I’m worried that I’ll run out of money?

These, and variants of them, are questions we hear repeatedly from people who enquire about our services.  The questions about getting the balance between living the life they want to live now without compromising their financial future, also crop up in the first couple of years during review meetings with new clients, but interestingly the frequency of those questions tends to reduce the longer clients work with us.

Of course, the answers will be different for everyone, and whilst we have no crystal ball to be able to answer these questions with certainty, what we can do is offer an informed opinion.

Central to the work we do with our clients is their lifetime cashflow.  Working collaboratively with them to create the cashflow, this incorporates all known, planned inflows and outflows throughout their lives.  We use reasonable, cautious, forward-looking assumptions for rates of inflation, earnings growth, investment returns, and longevity.  We assume a level of expenditure higher than our clients’ required level of inflows (for example if they need an absolute minimum inflow totalling £50,000 per annum, we assume an expenditure of, say, £75,000 per annum), as this allows for some wriggle room.

We end up with something which looks like this:

The cashflow can then be used to calculate the clients’ personal required rate of return – i.e. what their long-term assets need to achieve to meet the cost of their goals – a much more relevant benchmark than a stockmarket index.

The cashflow really comes into its own once our clients reach financial independence and cease paid work.  It can be a stressful time, as you adapt to no longer having a paycheque coming in every month, and every day being like a Saturday.  In the early years, people tend to underspend, as they get used to moving from the accumulation to decumulation phase.  As with everything in life, some adapt more easily than others, but it’s undoubtedly the case that it’s much easier to adapt, and to know what your safe spending rate is when you have a lifetime cashflow to inform your decisions.

Of course, all of the assumptions we make in the cashflow will turn out to be wrong: inflation will be higher or lower than we assume; investment returns will not occur in a straight line and will be lower or higher each year than we assume; tax rates will change, although annual reviews and updates allow for small ‘course corrections’ to be made in light of what has actually happened.

But for all its imperfections, imagine trying to plan without a cashflow?  It’s like trying to find your way to an unfamiliar destination with no map and no road signs. Or captaining a ship without the benefit of a tool which will give you your precise longitude.

Imagine how much easier it would be to answer any of the questions above if you have a lifetime cashflow.

This is one of the most important benefits of working with a financial planner. You stand a much better chance of not being pillaged by pirates or ending up on the rocks.

*Just twenty-four hours before the admiral and his crew met their watery graves, a member of the ship’s crew approached him, claiming to have kept his own log of the fleet’s location throughout the voyage, and by his calculations the fleet was in grave danger of running aground.  ‘Subversive’ navigation by an inferior crew member was something which was forbidden in the Royal Navy, but the sailor felt so strongly that he was willing to take the risk to help his captain avoid a catastrophe.  Admiral Shovell had the man hanged for mutiny on the spot.