If You See Sid, Tell Him 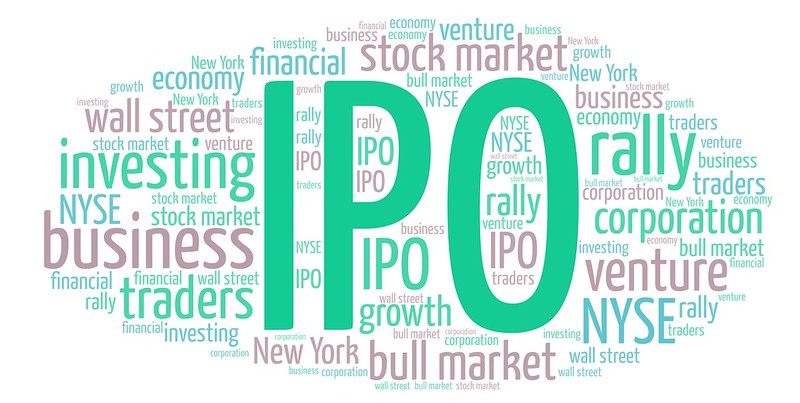 Posted at 12:27h in Investment by Carolyn Gowen

Back in 1986, and following the huge success of the privatisation of British Telecom in 1984, UK share ownership by the ‘man in the street’ finally gained traction. It was the start of an era of mass privatisation (or the selling of the family jewels at bargain-basement prices, depending on your political persuasion) by the Conservative government led by Margaret Thatcher.

This advert for the privatisation of British Gas perfectly captured the zeitgeist of that time. For the first time, ‘Little England’ was able to share in the spoils only previously enjoyed by the elite. According to Kenneth Baker, a government minister at the time, “When we came into office, there were about three million people who owned shares in Britain. By the end of the Thatcher years, there were 12 to 15 million shareholders”.

And this was despite some fierce opposition to the privatisation programme. John Moore, Financial Secretary to the Treasury during the period recalls the reaction of the head of a large stockbroking firm when told of the government’s plans, “But John,” he said in a shocked voice, “we don’t want all those kinds of people owning shares, do we?” 😂

Many investors saw buying shares in these companies as a way to make easy money. Immediately the shares started trading there were often decent profits to be had as demand nearly always outstripped supply.

The era of privatisation may be over, but new listings of private companies (IPOs) still have the potential to lure investors with the hope of making a killing. The recent listing of Beyond Meat being a prime example: 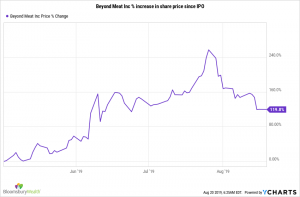 If you’d invested at the IPO, you’d have seen your investment grow by around 250% within A COUPLE OF MONTHS. Insane. Shades of 1999? Time will tell.

Investors have had the opportunity in recent months (in the US at least) to be part of several IPOs and certain sectors of the media have done their best to create a feeding frenzy. So, as an investment strategy, is this a sensible one? Dimensional Fund Advisors (DFA) has crunched some numbers to find out…

DFA’s researchers looked at the performance of over 6,000 IPOs between 1991 and 2018. DFA first looked at the short-term performance – i.e. the period immediately after the listing. They found that initial trading prices typically exceed the IPO offering price.[1] However, to obtain those first-day returns, you would have had to have obtained an allocation of shares from the underwriting banks.  Unfortunately, obtaining an allocation may well have been a challenge. There have been studies which have found that allocations to IPOs having poor first-day returns have generally been easier to obtain, while in the case of allocations to IPOs with good first‑day returns the underwriting banks have usually reserved these for certain clients.[2] (That stockbroker back in 1986 would no doubt have felt that was only right and proper 😉)

Ok, so accepting that most investors would probably not have benefited from those first-day returns, how did the IPOs perform in their first year?

DFA’s study consists of 6,362 US IPOs that occurred from January 1991 to December 2018 and for which data is available.[3] It’s worth noting that the period from 1991 to 2000 was a time of relatively high IPO frequency rates (420 per year) followed by a less active 18-year period during which the rate fell significantly (120 IPOs on average per year).  However, while the number of IPOs has declined, the average IPO offering size is almost three times larger over the most recent period, as compared to the initial ten years in the sample.

Most IPOs fall into the small-cap size group (firms that fall below the largest 1,000 US‑domiciled common stocks at the most recent month‑end). Large-cap and mid-cap IPOs represent 24% and 19%, respectively, of total capital raised through IPOs over the sample period.

The charts below illustrate the dispersion of those 6,362 companies by number of IPOs each year and by size based on the initial offering size. 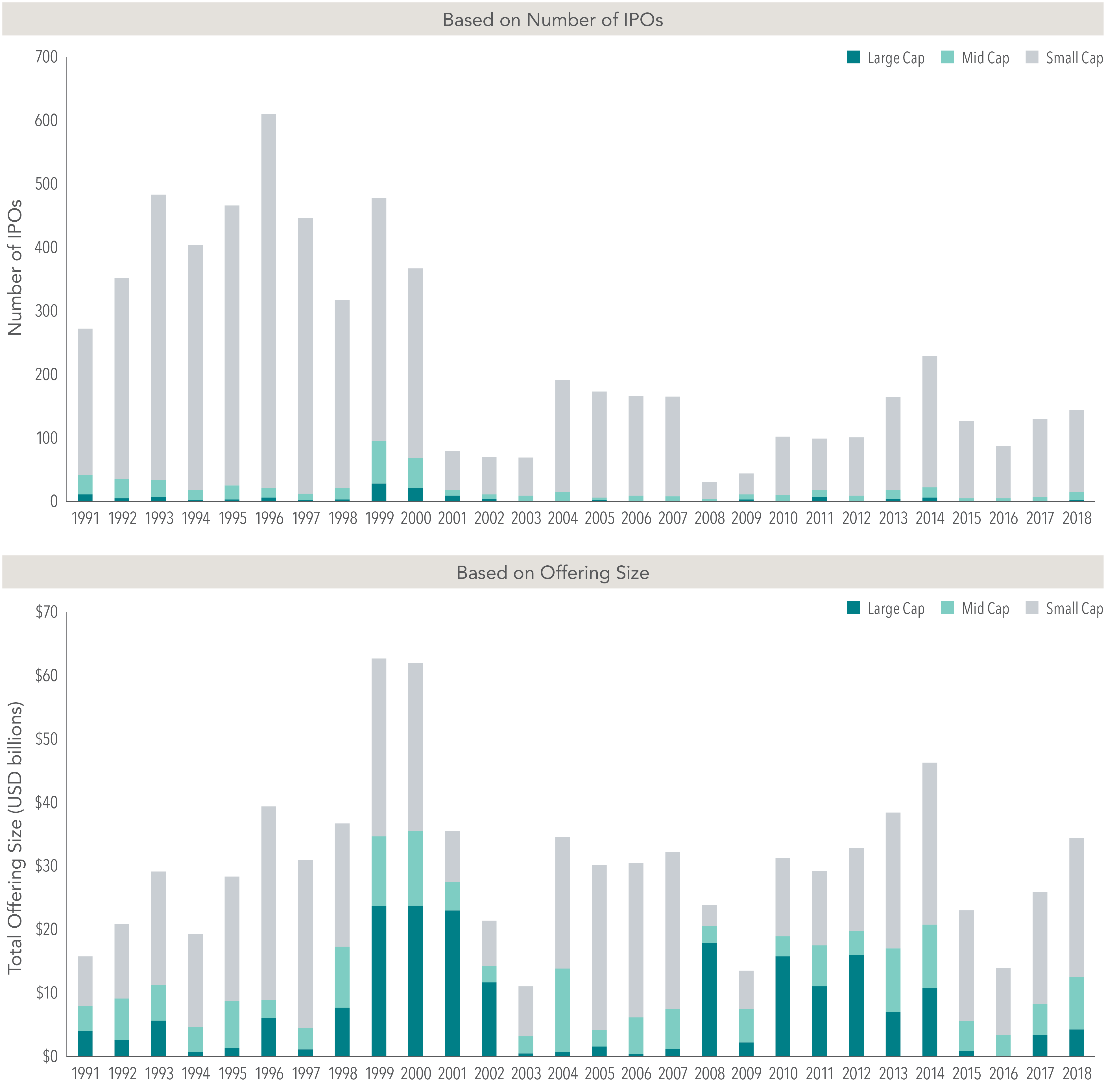 Source: Dimensional using Bloomberg data. The sample includes US market IPOs, including US-domiciled companies and foreign-domiciled IPOs in the US, with an offering date between January 1, 1991, to December 31, 2018. Excluded from the sample are IPOs with an offer price below $5, unit IPOs (common stock and warrants), and IPOs involving real estate investment trusts, closed-end funds, American depository receipts, partnerships, and acquisition companies. IPO categories (small, mid, and large) are based on market cap rank relative to all US-domiciled common stocks as of the most recent month-end. Large, mid, and small-cap are defined as firms that rank in the top 500, 501–1,000, and >1,000 by market value, respectively.

Past performance does not guarantee future results.
Source: Dimensional using Bloomberg data. The sample includes US market IPOs, including US-domiciled companies and foreign-domiciled IPOs in the US, with an offering date between January 1, 1991, to December 31, 2018. Excluded from the sample are IPOs with an offer price below $5, unit IPOs (common stock and warrants), and IPOs involving real estate investment trusts, closed-end funds, American depository receipts, partnerships, and acquisition companies. The hypothetical IPO portfolio is formed December 31, 1991, and is rebalanced monthly to include all firms with an IPO during the prior 12-month period. Weights are based on prior month-end market capitalisation. Frank Russell Company is the source and owner of the trademarks, service marks, and copyrights related to the Russell Indices. Indices are not available for direct investment; therefore, their performance does not reflect the expenses associated with the management of an actual portfolio.

Exhibit 2 illustrates that IPOs underperformed the Russell 3000 Index in both the overall period and sub-sample periods.

This new research by DFA helps to illustrate the risks inherent in investing in IPOs. Firstly, there are several fundamental challenges IPO investors face:

And finally, the first-year performance is often underwhelming. While these companies may do well over the longer term, the risk is that investors will bail out if the reality in the early months fails to live up to the initial hype.

Ultimately, there’s a perfectly logical reason why so many IPOs underperform in this early period. It’s all down to those known drivers of returns. IPOs have underperformed the market because, as a group, they have behaved like small growth, low profitability, high investment stocks, which as a group have lower expected returns than the market.[5]

When the next massively hyped IPO rolls around, tread carefully.  Dig a bit deeper than the media frenzy.

And remember. If you see Sid, don’t tell him.