Index Funds - Are They Really A Cause For Concern?

09 May Index Funds - Are They Really A Cause For Concern?

Posted at 15:40h in Investment by Carolyn Gowen

As money has continued to flow out of active funds into passive index funds, the last few years have seen an increasing number of articles claiming that index funds are detrimental to the economy, “an insidious disease”, or even – horror of horrors – “worse than Marxism”.

So how valid are these claims?  Dimensional Fund Advisors (DFA) published a paper last month examining the validity behind some of these claims.

The first point they make is that, despite some media commentary that implies index funds are taking over the world, the amount of worldwide capital allocated to passive funds still represents a tiny amount of global assets – only 35% of assets invested in US equities were held in passive vehicles as at 31st December 2017 (up from 15% in 2007). The amount held in UK equities is considerably less – an article by Vanguard in 2017 put the figure at 14%. 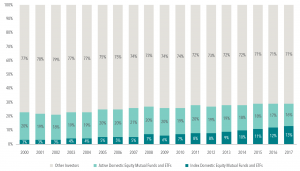 With such a relatively small proportion of assets invested in passive vehicles (and the fact that ETFs which represent the bulk of these tend to be traded ‘actively’ by many investors), the above figures should not provide any serious cause for concern.

Equity mutual funds are not ‘the market’
DFA goes on to point out that market participants are not restricted to mutual funds, and prices reflect the views of everyone. Pension funds, endowments, hedge funds and insurance companies also participate in markets, and these institutional investors allocate very few assets to a passive strategy.

Professors Eugene Fama and Kenneth French also covered this in their blog post titled “Q&A: What if Everybody Indexed?” and made the following comment:

As the above graph illustrates, trading volumes have barely changed in the last ten years. This indicates there is no link between issues surrounding price discovery and the rise of passive investing.

Of course, the trading of securities is only one way by which new information can feed through to share prices.  There are at least two other ways in which this happens[1]:

But what if? What if?
Even though the historical evidence suggests that indexing will not cause problems in terms of distorting prices and therefore markets, DFA looked at one more scenario. In this, they assume that passive investing has had an effect on price discovery, and as a result, market prices have been distorted and have been less reliable.

What would we reasonably expect to see in this scenario? Well, if markets are distorted by indexing and prices are unreliable, it would be safe to assume that stock picking active fund managers could take advantage of the mispricing, increasing their ability to outperform the market.

So what does the evidence tell us?

Past performance is no guarantee of future results. US Equity mutual fund outperformance percentages are shown for the three-year periods ending December 31 of each year, 2004–2018. Each sample includes equity funds available at the beginning of the three-year period. Outperformers are funds with return observations for every month of the three-year period whose cumulative net return over the period exceeded that of their respective Morningstar category index as at the start of the period. US-domiciled non-Dimensional mutual fund data is from Morningstar. Dimensional fund data provided by the fund accountant. For more methodology details, see the latest Mutual Fund Landscape brochure

But, but, but
Finally, DFA looked at one further aspect of market returns. If the rise of indexing was causing mispricing, this should show up in the returns of the individual components of the index.  If you follow the argument that ‘a rising tide raises all boats’ (and vice versa), you would expect to see more uniformity in the rise and fall of shares within the same index as inflows would drive prices up uniformly.

So what does the evidence say?

DFA looked at the performance of stocks listed on the S&P 500, one of the most widely tracked indices, with almost $10 trillion benchmarked to that index, of which $3.4 trillion is invested in index funds.

What they discovered was that in 2008, a year in which, due to the Great Financial Crisis, the markets saw huge outflows of capital and an index return of –37.0%, the returns achieved by the individual components of the S&P 500 ranged from 39% to –97%.

Lastly, if the hypothesis of uniform returns were to hold, we would also expect to see similar returns from companies within a traditional market cap-weighted index which have similar weightings.

Conclusion
I’m certain that we haven’t seen the end of articles espousing the ‘danger’ of index funds, but the evidence given to support their arguments has thus far been sadly lacking. There is, however, ample evidence – as the above demonstrates – to prove that indexing is not causing any of the problems of which it is accused. Markets continue to function normally, index funds still represent a small percentage of global invested assets, and – of course – indexing is only one of many options available to investors.

I would also conclude by saying that some people read my blog and assume that we at Bloomsbury are dyed in the wool passive investors. Nothing could be further from the truth. We are completely agnostic. We care only about providing the best possible investment experience for our clients at the lowest possible cost. That means we go where the evidence takes us, and we constantly review that evidence. If at some point the evidence were to take us in a different direction, we would happily review and adapt our investment philosophy.  As Frank Zappa once said “A mind is like a parachute. It doesn’t work if it is not open.”

Derivative: A financial instrument whose value is based on an underlying asset or security.

Options Contract: An options contract is an agreement between two parties to facilitate a potential transaction on an underlying security at a preset price.

Futures: A financial contract obligating the buyer to purchase an asset or a seller to sell an asset at a predetermined future time and price.