Should you be concerned about long term inflation? 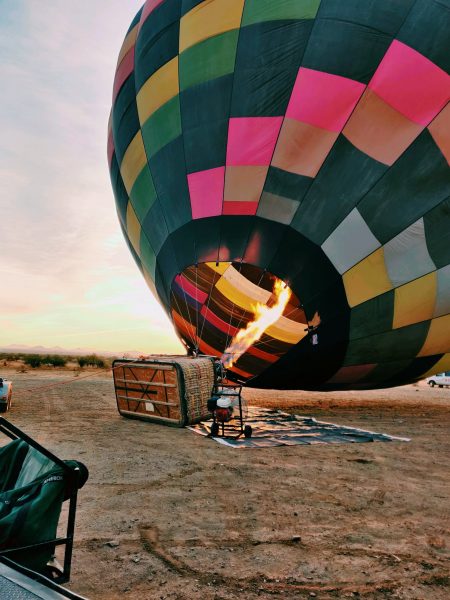 13 Jul Should you be concerned about long term inflation?

The media is currently full of stories about the ‘cost of living crisis’ as annual inflation has reached a level not seen for decades in the UK.  Indeed, judging by what I pay to refuel my car every week, it is certainly a real thing.

One of the questions that has come up in most if not all of the client meetings I have attended recently concerns the impact of the increased inflation on the viability of their plan.  Unsurprisingly, particularly for anyone who is dependent on their investment capital and/or a relatively fixed income to meet their future lifestyle costs, it is a question of more than academic interest.  Such individuals are not in a position to negotiate with their employer for a pay rise or simply to pay themselves more from a business that they own.

Yet those clients whose financial plans have been reviewed recently will have noticed that we have not elected to adjust the inflation assumption which we use in our long term cashflow planning on their behalf.

We set this at 2.5% several years ago and although it is reviewed every year, we have not yet felt the need to change it.  Partly this is because we don’t actually use it for projecting a client’s expenditure.  Instead we recognise that most of our clients incur a higher proportion of their expenditure on services rather than goods and the cost of the former generally increases at a faster rate than the latter.  We therefore assume a higher rate of expenditure escalation than general price inflation.  Since the relationship between resources and lifetime expenditure is one of the most important factors in identifying whether a client’s resources are likely to be sufficient to meet their objectives, we prefer to be cautious when projecting expenditure.  Nevertheless, there is a balance to be maintained, as assuming an excessively high rate of expenditure escalation can suggest that either goals should be trimmed or that more investment risk needs to be taken, neither of which is necessarily an appealing prospect.

The chart below shows how inflation, as measured by the consumer prices index (the longer running Retail Prices Index having been discredited in 2020 as ‘not fit for purpose’ by no less an authority other than the National Statistician) has fluctuated pretty wildly since the CPI started in 1989. 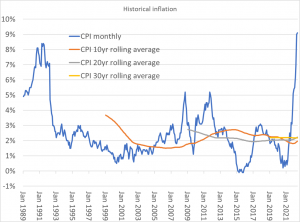 However, if we apply a moving average or two, recognising that we are in the business of long term planning, we can see that as the averaging term increases, the trendline flattens out.  Indeed, averaging over 30 years the line is pretty well flat at 2.2%, even though in only eight of 400 months was the CPI 2.2% and it varied between -0.1% and the current 9.1% over the period to May 2022.

Even the 20-year average only ticks up slightly from its 2% level in the first few months of this year, after a sustained fall from 2.7%.

If this were a stock price chart, the current peak would look like a bubble and be a potential ‘sell’ signal and indeed the expectation is that inflation will not remain at this level for long.  The Office of Budget Responsibility (OBR) expects CPI inflation to peak in late 2022 and then to fall back under 2% in late 2023, returning to the bank of England’s 2% target at the end of 2025.  If the OBR is right, this will merely be a blip on the long term chart and in due course will be remembered as simply an anomaly as the world emerged from a pandemic which had seen inflation falling to under 1%. 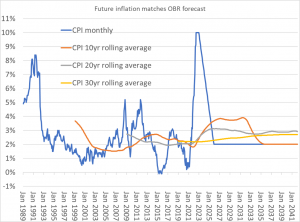 But what if the OBR is wrong?  After all, forecasting anything in economics is a tricky enterprise – I remember Roger Bootle once saying that the secret of economic forecasting is to “give them a number or a date but not both”.  What if inflation doesn’t fall and it stays at its current level?  How long would it take for that to have a material impact on the long term average and for it to be worthwhile to adjust our expectations?

To answer these questions, we have run a scenario in which exactly that happens – inflation does not fall back this year or next year but stays at 9.1% for the next 20 years.  This might not seem hugely likely but stress testing our clients’ plans with events that may seem unlikely is a useful way to determine how resilient they are to unexpected circumstances. 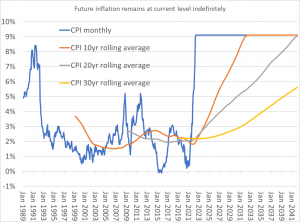 It’s obviously possible that inflation could increase to a rate above 9.1% (and not fall back subsequently), in which case these periods would reduce in length but the charts show that the impact of short term blips on the long term picture is much less than the headline writers might have you believe.

Of course inflation is one of the assumptions that should be kept under review for any plan but making upwards adjustments to the long term assumption for it as a consequence of the current developments would be as inappropriate as making a downwards adjustment when the rate was at around zero for much of 2015.