“The main thing about money, Bud, is that it makes you do things you don't want to do.”*

08 May “The main thing about money, Bud, is that it makes you do things you don't want to do.”*

Posted at 14:30h in Uncategorised by Carolyn Gowen

“On a sparkling winter’s day in 1826, a young Englishwoman named Ann Saunders boarded a vessel that was sailing from New Brunswick in Canada to Liverpool.

‘We set sail’ she later wrote, ‘with a favourable wind and the prospect of joyful expectations of an expeditious passage.’

There were twenty-one people on board, including Ann’s close friend Mrs Kendall, the wife of the captain.”

Unfortunately, after three weeks at sea, on the 1st February the ship was hit by a violent storm which resulted in every moveable object being swept from the decks – including one of the crew, although his shipmates were able to rescue him.

The storm grew in ferocity and out of nowhere a freak wave hit the ship with such force that part of the hull was ripped away.  The hold quickly flooded, and a second wave flipped the vessel upwards through forty-five degrees.  All those on board clung to the ship’s rigging and eventually manged to pull themselves up towards the forecastle, the only part of the ship still above water.

The ship then stabilised as the storm subsided.

Some of the crew were able to salvage 50 pounds of bread and biscuit and a few pounds of cheese.  Not a lot to sustain twenty-one people in the middle of an Atlantic winter.

Before long, they began to die.  The first death occurred on the 12th February and the body was quickly thrown overboard.  The second death, of John Wilson, coincided with the last of the biscuits having been eaten.  After a short discussion, the surviving crew and passengers took the difficult decision to eat him to keep themselves alive.

Ann Saunders watched as Wilson’s body was dismembered, cut into chunks, washed in salt water then hung to dry a little before being shared out amongst the survivors, but she could not bring herself to eat human flesh.  After another twenty-four hours without food however, she changed her mind.

Having crossed that line, the group dynamics changed – everyone was now a potential meal.

Now men were dying every day.  The survivors progressed from eating the flesh of the dead to eating their livers and hearts.  Once the barrels of water which the crew had managed to salvage ran dry, they started to drink blood – cutting the throats of the deceased within minutes of their deaths.

The hardest part, Ann later recounted, was having to eat the young man, James Frier, to whom she had become engaged in the horrific days which followed the storm.

By the time they were rescued, by HMS Blonde, only six survivors remained.  They finally reached England more than two months after setting sail.

At the end of her ordeal, Ann was quite philosophical about having eaten her fiancé.  ‘I think that I witnessed more of the heavy judgements and afflictions of this world than any other of its female inhabitants,’ she said.

It’s amazing what human beings will do to survive, isn’t it?

When our stress levels reach a certain point calm, rational thought is overtaken by our most deeply engrained instinctive behaviour and to survive we are prepared to act in ways of which we would never believe ourselves capable.

In prehistoric times our brains needed us to behave in this way.  We had to be able to recognise risks and act accordingly.  Failure to do so would soon have wiped out our species.  As a result, we have evolved to be very good at evaluating short-term situations (choosing between starvation and cannibalism for example) and responding emotionally at lightning speed.  Unfortunately, we’re not quite so adept at recognising longer term patterns or being able to see the big picture.  This can lead to our judgment being clouded as our basic instincts kick in.

Irrational emotion-driven behaviour applies to investing as much as it does to other areas of our lives.  We might like to think we’re rational when investing but the scientific and academic evidence shows that fear, greed and ego play a huge role in whether we have a successful investment experience.

There’s a chart which has been circulating on the internet since the dot com boom and bust back in 1999/2000 which illustrates this perfectly (source unknown): 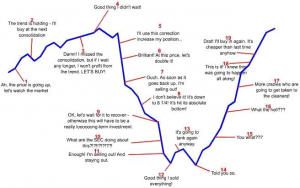 The good news is we can learn to control our emotional behaviour as investors.  The following strategies should help you in maintaining a cool head the next time all those around you are losing theirs:

And finally, remember that when we are engaged in the act of investing, our brains can experience the effects of a satisfying investment payoff as being similar to those of taking cocaine. Given the emotional rollercoaster that can be experienced through investing it is important to be aware of what your brain is up to and make sure you keep checking in with reality.

“The investor’s chief problem – and even his worst enemy – is likely to be himself.”