Why volatility isn’t the risk which should worry you 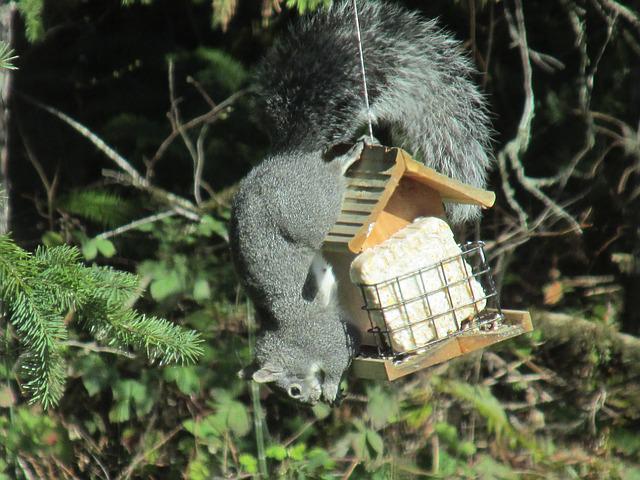 Posted at 14:14h in Financial planning, Investment by Robert Lockie

I recently read a consultation document regarding proposed changes to the way in which projections for money purchase pension schemes are calculated.  While this may not be of much interest to many people in that limited context, it occurs to me that it has wider implications for investment planning in general.

For many years, future returns have been projected at rates set by the regulator of the day and based on long-term historical returns for the types of assets which such funds tend to hold.  The research behind this was carried out by independent third parties and formed the basis of research papers published every few years by the regulator.  I always found that these documents were quite helpful and back when I was training other financial planners, I would often recommend that candidates read them as preparation for determining their own assumptions.  Given what we know from the research of such pioneers as Brinson et al., that the majority of the variation in returns between portfolios is explicable by the mix of underlying assets which they contain, basing return assumptions on the underlying asset returns seems like a sound approach to me.

However, it seems that things may be changing.  And unlike much of the change that we see in financial services, this one is not for the better.

The document, produced by the Financial Reporting Council, proposes that in the future, the projections of fund values should be based not on the expected or historic long term returns of the underlying asset classes but instead on the price volatility in the last five-years of the specific fund being projected.  There are provisions for the obvious issue of dealing with assets with no five-year history but here I want to look at the general principle of why using volatility is a poor starting point.

Volatility has been widely used as a way to measure investment risk ever since Harry Markowitz proposed it in the early 1950s when he came up with a modern portfolio theory.  Intriguingly, before this date, the volatility of portfolio returns was barely even considered when assessing how a portfolio had performed.  As a convenient measure, Markowitz opted to use the well-known (at least in statistical circles) and established standard deviation as his metric for risk.  However, as Markowitz himself would admit, it is not a perfect measure for this purpose and it certainly does not address all the risks which concern an investor in the real world.

For investors, the risk which is by far the most important is that they will not achieve whatever their goals in life are.  This is a risk which is much less easy to measure statistically than volatility and which is affected by many more factors.

So what’s wrong with volatility as a measure of risk?

For a start, it treats variants, both positive and negative, from the average return over a period as of equal worth.  However, an investor is likely to regard unusually large positive returns as something to be welcomed rather than avoided, whereas the opposite is true of unusually large negative ones.  Even though a time series of returns is likely to include both, if the positives outweigh the negatives, the risk of the investor achieving their goals may not be negatively impacted.

The chart below illustrates that over the mid-to longer-term the markets absorb the consequences of such events and power forwards as capitalism drives the relentless pursuit of profit opportunities. 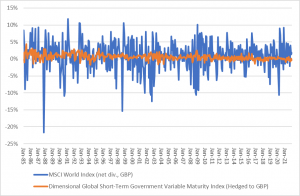 As the chart shows, there is typically a correlation between low volatility and low returns, those from global equities here being around 2%pa higher over the period shown.  However, what an investor needs to meet their goals are returns.  Low returns, particularly over a prolonged period, can increase the risk of their portfolio failing to meet those goals.  Although it may seem counter-intuitive, reducing the exposure to ‘risky’ assets such as equities in favour of ‘less risky’ fixed interest investments can have the effect of increasing the risk of failure, even if it may reduce the portfolio’s volatility.

Many of us have seen the charts of supposedly low risk portfolios which showed a steady return for years and then suddenly experienced a large fall because the apparently steady returns were concealing some other unanticipated risk.  Such a fall can cause panic among other investors in the portfolio, resulting in a cycle of forced selling as everyone runs for the door at once.   Surprising as it may be, such a portfolio can have the same standard deviation as one with constant but non-catastrophic fluctuations in value, although the investor’s experience over the entire period is very different.

The volatility of a particular asset or asset class also fails to allow for the fact that a well constructed portfolio comprises multiple assets whose return patterns should be at least partially uncorrelated with each other.  Holding two uncorrelated but volatile assets can result in a less volatile overall portfolio if the ups of one cancel out the downs of the other.

It is also worth remembering that since volatility is a measure of the variation in returns over time, it is prone to changing as those underlying returns change.  Similarly, the correlations between assets are also not constant and as history reminds us frequently, they often increase in times of market stress.  A further point is that large movements can occur more frequently than predictions suggest and but they are not evenly distributed between positive and negative; instead there are often more large negative movements than positive ones.

Given all of these issues with the usefulness or otherwise of volatility when it comes to measuring portfolio returns, it is something of a mystery why it is being proposed as the basis for projecting the value of people’s pension benefits.  It is unreasonable to expect that most money purchase pension investors will have sufficient background (or indeed interest) in statistical methodologies to assess appropriately the data which is presented to them.  We know from numerous scandals that investors, particularly inexperienced ones, are extremely attracted to assets that apparently (even if not in reality) preserve the monetary value of their investment.  However, this absolute value is an arbitrary figure and bears no relationship to what matters, which is the value of their future needs.  The consequence is likely to be more investors selecting historically less volatile assets in the belief that they are ‘low risk’ and then having an investment experience which is unnecessarily sub-optimal.

In the real world, people have lifestyle goals and often complicated cashflows, with multiple sources of income and fluctuating levels of expenditure which result in withdrawal rates which are not constant and affected by many factors.  A financial plan which incorporates some element of estimation of his future cash flows as well as a critical evaluation of other risks which are less easily measured by statistical analysis is likely to provide a greater likelihood of meeting those critical goals and having the necessary assets in the correct form when liabilities arise.

Other risks which a simple standard deviation number will not detect include the possibility that an apparently low risk product may fail completely and the impact of holding an undiversified portfolio which is particularly subject to the specific factors affecting individual holdings or sectors.  A good financial planner can help to address these less visible risks as well as the ones you can calculate with a spreadsheet.

Risk warnings: This blog is intended for information purposes only and no action should be taken or refrained from being taken as a consequence without consulting a suitably qualified and regulated person.  Your capital is at risk when investing.  Past performance is not a reliable indicator of future results.