The Disadvantages of Advantages

13 Nov The Disadvantages of Advantages

“Wealth contains the seeds of its own destruction.”

I recently read Malcolm Gladwell’s book, David & Goliath.  It’s a book that examines why underdogs often win, and how what many would deem to be great advantages in life can turn out to be serious disadvantages.

Gladwell relates the story of “one of the most powerful people in Hollywood”, a man who had grown up in the 1950s in a family over whom the Great Depression had cast a huge shadow.  His father believed that if you wanted something, you worked for it. At age 10, this man had built up a book of neighbours whose driveways he would keep clear of snow throughout the winter. He had so much work he contracted some of it out to other kids and kept a close eye on them to ensure the job was done well. By the age of 11 he had $600 in the bank (the equivalent to $5,000 today).

“Any fool can spend money,” he said. “But to earn it and save it and defer gratification—then you learn to value it differently.”

At 16 he spent his summer working in his father’s scrap metal business – hard, dirty, boring work which motivated him to want more from his life. He studied business and law in college (while also running an on-campus laundry service), saving, saving all the time.

Today, he has more money than he could ever possibly need. He also has children he loves dearly. And there lies his problem:

As Gladwell points out:

“Children of multimillionaires in Hollywood do not rake the leaves of their neighbors in Beverly Hills. Their fathers do not wave the electricity bill angrily at them if they leave the lights on. They do not sit in a basketball arena behind a pillar and wonder what it would be like to sit courtside. They live courtside.”

Of course, if you live in poverty parenting is hard.  But there comes a point on the economic scale where more is not necessarily better.  Studies researching happiness have found that the tipping point is a family income of around $75,000.  Additional income after that point produces diminishing returns, and there eventually comes a point where money can start to adversely affect a parent’s ability to raise normal, well-adjusted children. You end up with a situation that looks something like this: 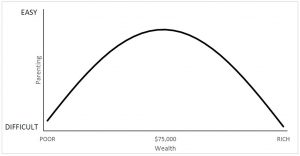 The Hollywood guy’s problem was that he had too much money.  It’s hard to teach kids to work hard and learn the value of money when they can look around and realise that actually, there’s no need for them to do so.

There’s a reason why almost every developed country has its own version of the saying ‘Shirtsleeves to shirtsleeves in three generations’, and history is littered with tales of families whose fortunes have followed this path. One of the most famous is that of the Vanderbilt’s fortune leading one of the heirs to comment:

“Inherited wealth is a real handicap to happiness… It has left me with nothing to hope for, with nothing definite to seek or strive for.”

Many of our clients face similar issues, being the first-generation wealth creators, wanting to give their children ‘a hand up, not a handout’, or as Warren Buffett suggests “…enough to do anything but not enough to do nothing.”  None of them ‘flash the cash’ but their children can’t help but realise at some point that the wealth exists.

So, what’s the answer? Well, as always, there’s no ‘one size fits all’ solution, but I think the most important is communication.  Keeping your kids in the dark (which, according to a US study, one in five parents with children over 25 have adopted as their ‘solution’) is not a sensible strategy.  Educating your children about the family’s wealth, and their role as future stewards of that wealth definitely is.

Resources which our clients have found helpful:

The Opposite of Spoiled: Raising Kids Who Are Grounded, Generous and Smart About Money – Ron Lieber

Our Guide to Preparing Your Heirs