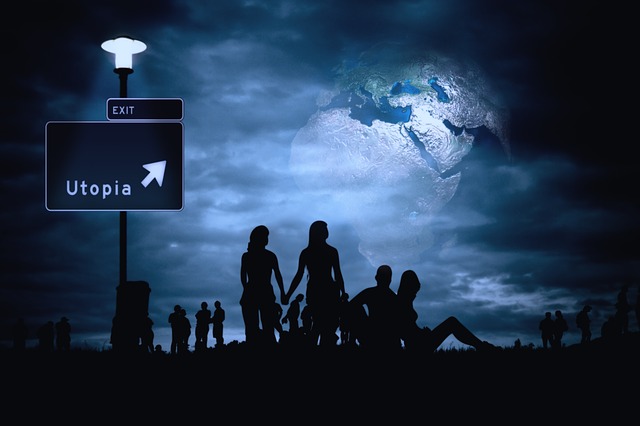 Posted at 10:25h in Books, Philosophy by Carolyn Gowen

“A map of the world that does not include Utopia is not worth even glancing at, for it leaves out the one country at which Humanity is always landing. And when Humanity lands there, it looks out, and, seeing a better country, sets sail. Progress is the realisation of Utopias.”
– Oscar Wilde

I haven’t done a monthly book review for a few months. This isn’t because I’ve stopped reading – far from it. It’s just that I’ve struggled to find anything good enough to a) finish and b) recommend on this blog.

I take a ruthless approach to my reading. If a book hasn’t engaged me within the first 50 pages, I’m unlikely to finish it. There are too many books out there to waste my time on ones which don’t grab me by the throat in some way.

I think I’ve reached a turning point though, as I’ve found a couple of gems in the last few weeks. Today, I’m writing about just one of these – Utopia For Realists: And How We Can Get There.

This book was recommended to me by a German Wealth Manager I met at a DFA conference in Austin a couple of years ago, and have since stayed in touch with, who mentioned it to me after reading my review of Future Politics. I doubt the book would have crossed my path without his prodding and I’m very glad it did.

Rutger Bregman is a young Dutch historian who has been rattling a lot of cages in the last few years. He was invited to speak on a panel at the World Economic Forum in Davos in January this year. He kicked off with these words:

“This is my first time at Davos, and I find it quite a bewildering experience, to be honest. I mean 1,500 private jets flown in here to hear Sir David Attenborough speak about how, you know, we’re wrecking the planet.”

He pulls no punches and had no hesitation in calling out the irony of that situation.

Dismissed by many as part of the ‘loony left’, including Fox News’s anchor Tucker Carlson (warning, language), in fact, he seems to have as many critics among those on the left as those on the right.

One thing is for sure, if you listen to him speak, as in this TED Talk, you can’t help but feel uncomfortable. Whether you agree with him or not, you should, at the very least, find yourself questioning your previously held beliefs.

That, at least, was my experience in reading this book. A book which argues for:

That’s the Utopia part of the book. What the future could be, what it might look like if we looked at the world differently.

The final part of the book deals with the Realist aspect, because hey, those ideas are just crazy, right? Well, who knows? Bregman readily admits that to move his ideas forward would take a mahoosive shift in popular thinking and for politicians to think the ‘unthinkable’. Politicians are notorious for not talking about any policies which might be deemed as being too radical, but we’re already seeing the likes of Trump and Boris Johnson, both of whom appear to have mastered the art of shifting the Overton window, do this. If they can do it, why can’t others?

I found that this book took me out of my comfort zone on many occasions, challenging my beliefs and making me wonder whether I haven’t become entrenched in some of my thoughts as a result of being guilty, as we so often are, of looking at certain ideas from the one dimension of my echo chamber.

Just because something is hard, doesn’t mean we shouldn’t try. Ideas really DO change the future. When asked what she viewed as her greatest victory in her political life, Margaret Thatcher replied “New Labour”. Just think about that for a second. She changed the worldview of the Labour Party.

I do believe there is a growing acceptance that something radical needs to happen to narrow the gap between rich and poor and offer an antidote to xenophobia and inequality. We just need more people like Bregman rattling cages.

“The difficulty lies, not in the new ideas, but in escaping from the old ones.”
–  John Maynard Keynes