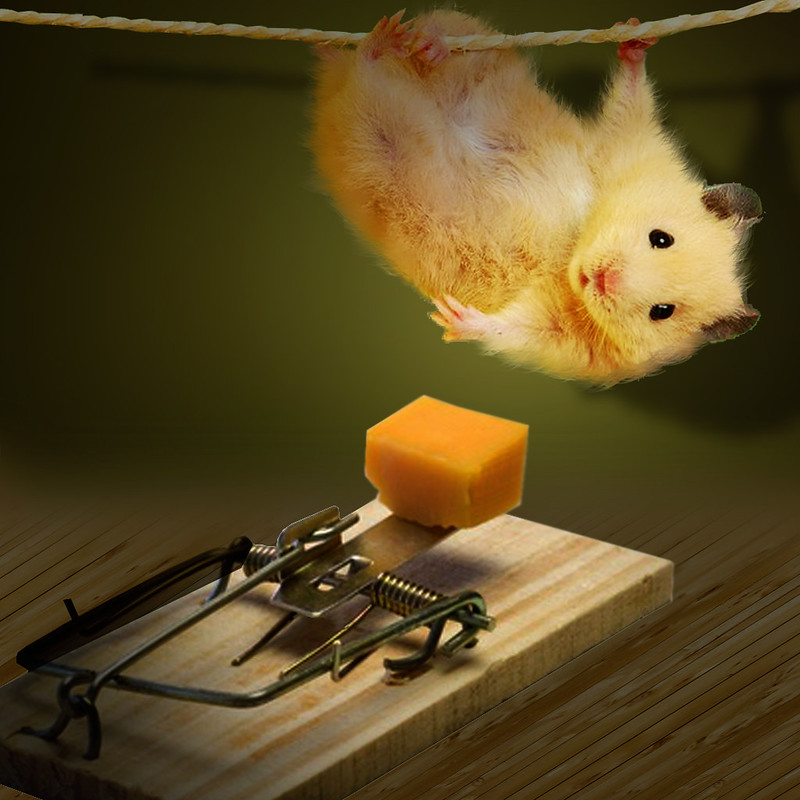 I was very fortunate to attend a presentation given by Morgan Housel recently, in which he told five stories – none of which had anything to do with investing – which help to explain why we are so susceptible to letting poor behaviour drive our investing decisions.

After the presentation, Morgan very kindly gave me permission to use those stories as the basis for posts on this blog.

While I in no way possess the storytelling prowess of Morgan, I hope that over the next few weeks, I can get the concepts across.

With that said, on with the first story.

An important, but often overlooked concept of what drives our behaviour as investors relates to our personal history.

What we experience in life – particularly in our youth – can have a huge impact on how we see life in general, and specifically on our willingness to take risk.

When Morgan was telling his story to illustrate this (about earthquakes, of all things!), it made me think of something I saw on TV years ago, which has always stuck in my mind.

Back in the 1990s, The Jerry Springer Show was one of those early examples of ‘car crash television’, and when it was first imported into the UK, it was like nothing we had ever seen before.  The show occupied a slot in the day time television schedule for some years, and I very rarely saw it, but for some reason one afternoon I did happen to watch an episode.

Jerry would end each show with a ‘Final Thought’ and on this day, the story he told hit me so hard I have never forgotten it.

Sadly, I’ve been unable to track down a clip of the actual show in question, but I did find an interview he did some years later where he told the same story. Go ahead and watch the first 1 minute 15 seconds of this video (warning, you might find you’ve got something in your eye after watching it

It’s easy to think that we can ‘unlearn’ what we experience early on in our lives, but the reality is it’s incredibly difficult to do so.

When it comes to investing, and the level of risk which you can tolerate emotionally, much will be determined by the view you formed about the stock market from the point at which you became aware that such a thing existed.

For example, if you started investing in the US stock market at the beginning of 1970, this is what you experienced: 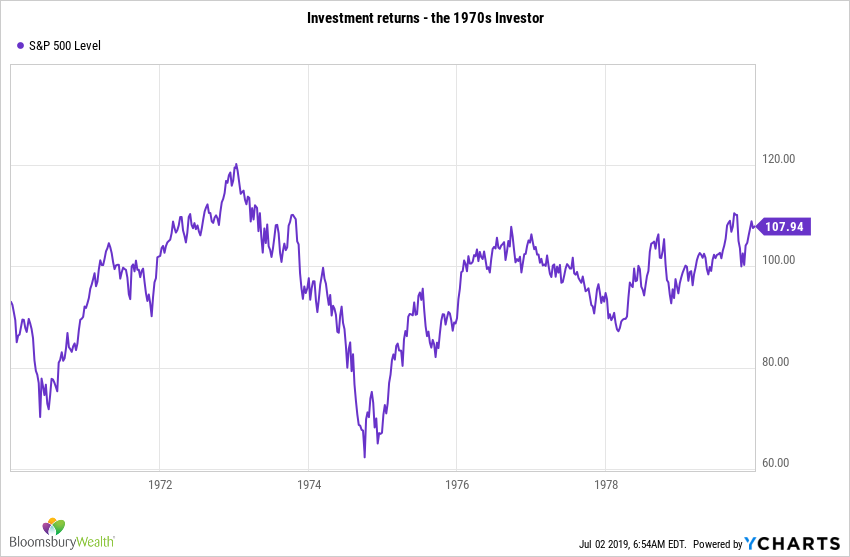 Had you started investing on 1st January 2000, the position was even worse (this is what investing seems like to some Millennials): 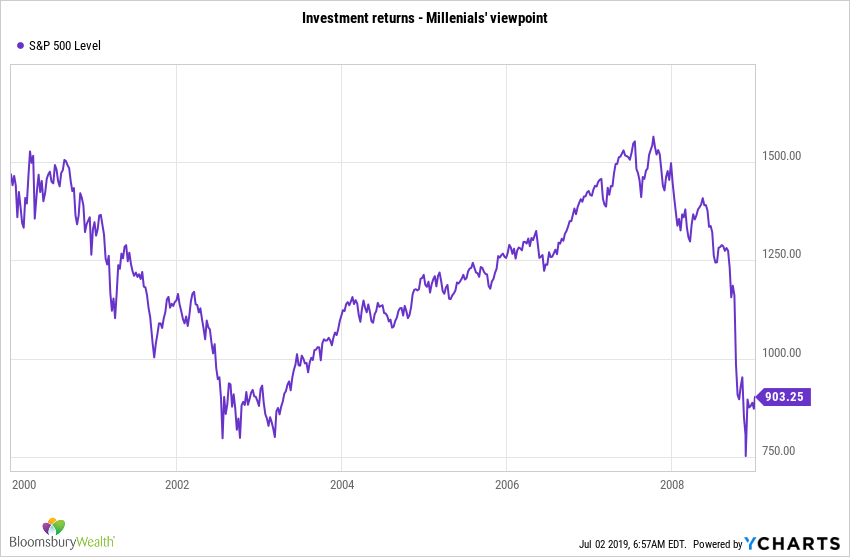 If you had invested $10,000 on 1st January 2000, by the end of 2008, it would have decreased in value to $6,148. Millennials experienced both the Tech Wreck and the Great Financial Crisis (GFC) in rapid succession. On the bright side, at least inflation was more benign during that period. Inflation totalled just 25% during those nine years so $10,000 would only have needed to have grown to $12,503 to maintain its purchasing power.[2]

However, if you had the good fortune to start investing at the beginning of 2009, you’ve really lucked out: 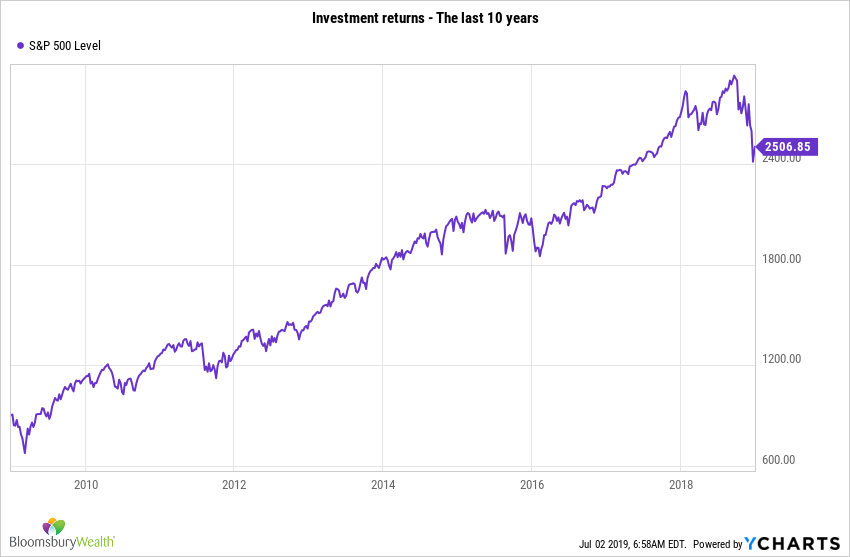 It’s easy to see how investing in those three periods would colour your attitude to risk. In the first two instances, you’d probably be fairly risk-averse. In the third scenario – having pretty much only experienced rising markets (and low volatility) – your attitude to risk could be a bit too ‘gung ho’.

This is incredibly important for those of us who help our clients to invest. We need to understand how they view risk emotionally. Someone might have a huge capacity for risk, but it is their emotional tolerance to risk which will have the biggest impact on their behaviour as an investor, and their ability to ‘stay the course’.

How much capital (human or asset-based) someone has should not solely determine either the amount (i.e. over and above a cash buffer) invested in or the asset allocation of their long-term portfolio. The driver for selecting an appropriate level of surplus capital to invest and the mix between equity-based investments and fixed income investments must ALWAYS reflect the client’s emotional tolerance to risk.

At Bloomsbury, we use a psychometric risk profiling tool to help us in determining a client’s emotional tolerance to risk, but we also find out at the very first meeting with a potential client what their experience with money has been. We ask them what they learned from their parents about money, we ask them about their own experiences around money and what money means to them. The answers we get to these kinds of questions tell us what we need to know and help us to select an investment portfolio our clients should be able to stick with through thick and thin.

We will not implement a plan which involves a long-term portfolio asset mix which is above what the client can tolerate emotionally. We would rather not act for a client than do otherwise. We take this approach because we experienced the GFC alongside our clients. They all stayed the course because – unpleasant as it undoubtedly was – they could emotionally tolerate the falls they experienced in the values of their portfolios.

Our phones were not ringing off the hook with clients in a state of panic. We were proactive in making sure we were able to provide reassurance where needed, but to be honest pretty much every client took it in their stride, even though they were obviously concerned.

Equally importantly, we didn’t panic either, and even though it was uncomfortable for us too, we did what we had promised our clients we would do. We stuck to our rules-based process and simply rebalanced back to the clients’ model asset allocations throughout that period.

Being able to sleep at night when you hold risk assets is priceless. But you may only realise the real value of that when you work collaboratively with an adviser who truly understands what makes you tick.