Why Are We Such Poor Investors #2 - The Behaviour Gap 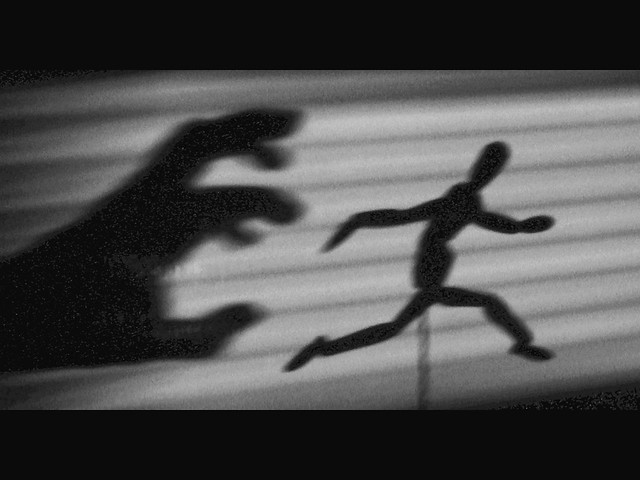 When an intangible feeling of risk fills the air, you can catch other people’s emotions as easily as you can catch a cold
Jason Zweig – Your Money & Your Brain

In case you missed last week’s blog, this is Part 2 in a short series on investor behaviour.

This week – the behaviour gap.

Back when we were living a hunter-gatherer life on the plains of the savannah, we needed to be aware of any threats that might cost us our lives, so our brains developed a ‘fight or flight’ response to any perceived risks we encountered.

This ‘alarm system’ resides deep in our brains – in the amygdala. It is this part of our brain which leaps into action, generating lightning reactions such as fear whenever we encounter a situation we feel to be risky. Its job is to alert us to potential threats and get us to react.

When the fight or flight response is triggered, we often act without thinking – and this can be absolutely the right thing to do. Sometimes, we need to act immediately rather than waste precious seconds trying to rationally weigh up the level of risk we are being confronted with.

But while we clearly still need an early warning system to help us react instinctively in times when we are at risk (prompting us to leave a burning building for example), unfortunately the amygdala can sometimes react without us realising and in situations when the right thing to do is to take some time to consider the situation rationally.

Studies have shown that we even react to words which imply some kind of threat. A frightening word can make us break into a sweat even when it flashes up on a screen for just a few thousandths of a second.

One area where we see the downside of this fight or flight response is when we are investing.

It’s common to read articles on the internet about the stonking amounts of money you could have made in some of today’s hugely successful companies.

Let’s take the example of Netflix, for example.

If you’d invested $10,000 when Netflix first went public at the end of May 2002, just look how well you would have done: 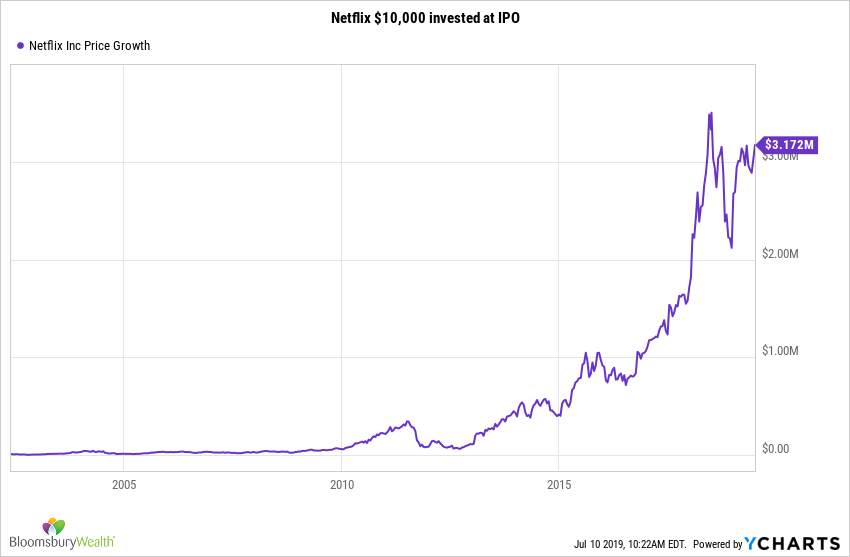 But how many of those who invested back in 2002 would have received those returns? An increase in the stock price of almost 32,000 per cent.

I’d be willing to bet that hardly anyone got those returns. Why? Well, let’s look at the story behind those returns 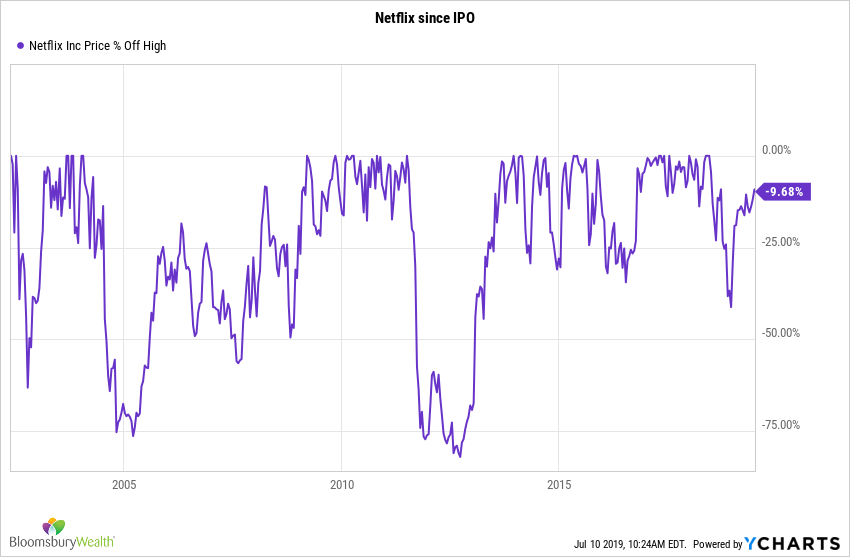 Not quite so pretty is it?

Since its IPO in 2002, the share price has dropped by more than 20% on a frightening number of occasions.  How would you have felt then? Or on the numerous occasions you saw the value of your investment drop by more than 50%? Or by more than 75%?

The reality is that few investors would have had the stomach to ride out those kinds of drawdowns.

And why is that? Well, it’s our old friend the amygdala at work again. A study using brain scans of the participants found that the more frequently people were told they were losing money, the more active their amygdala became. Other scans have shown that when you are on a losing streak, each new loss increases your feelings of fear and anxiety.

The additional kick in the teeth in all this is that, before risk rears its ugly head, we tend to be over-confident in our abilities to predict the outcome of our actions. Looking at the charts above, you can bet the house that there were plenty of investors in Netflix patting themselves on the back during those periods when the share price was soaring. Yet those same investors would have been stampeding to the exit when those drawdowns kicked in.

Just like with Netflix, the stock market tends to do well over the long term, but in amongst those returns is an awful lot of ‘noise’ that investors need to contend with.

Investors’ actions when they realise that the outcome they predicted is not quite the same as reality, tend to follow this path:

Overconfidence in our ability to predict the future and the contrasting fear of financial loss lurk deep within us all. Behavioural economist, Daniel Kahneman, talked about this in this interview with Morgan Housel:

This behaviour explains why so few investors manage to capture the market returns, which are there for everyone to obtain and is often referred to as ‘The Behaviour Gap’: 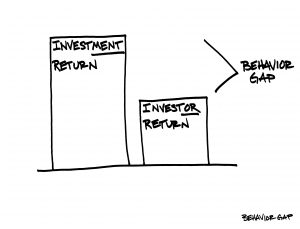 Fortunately, there is an answer. ‘Adviser’s Alpha’.

“What the heck is Adviser’s Alpha?”

Well, it’s explained in some detail by Vanguard here, but can be boiled down to a simple number – about 3% per annum. That’s the value Vanguard have calculated that a wealth management firm operating under best practices can add, and they have broken that figure down as follows:

What’s most interesting to me is the value Vanguard places on behavioural coaching, but I think they are absolutely right. Having someone there who has no axe to grind, to act as the voice of reason can have a huge impact on your investment experience.

The good news is that you don’t have to be brilliant at predicting market movements; you just have to keep your head when all those around you are losing theirs.

It’s undoubtedly the case that our behaviour and our inability to control our emotions when investing destroys far more wealth than whether you adopt an active or passive investing strategy or whether you invest in low or higher cost funds. Those things are important considerations too, but neither of them is likely to have as much impact as simply being able to stay the course. If a trusted adviser can help you to do that, that’s got to be worth paying for.

“There is simply no telling how far stocks can fall in a short period. Even if your borrowings are small and your positions aren’t immediately threatened by the plunging market, your mind may well become rattled by scary headlines and breathless commentary. And an unsettled mind will not make good decisions.”
Warren Buffett